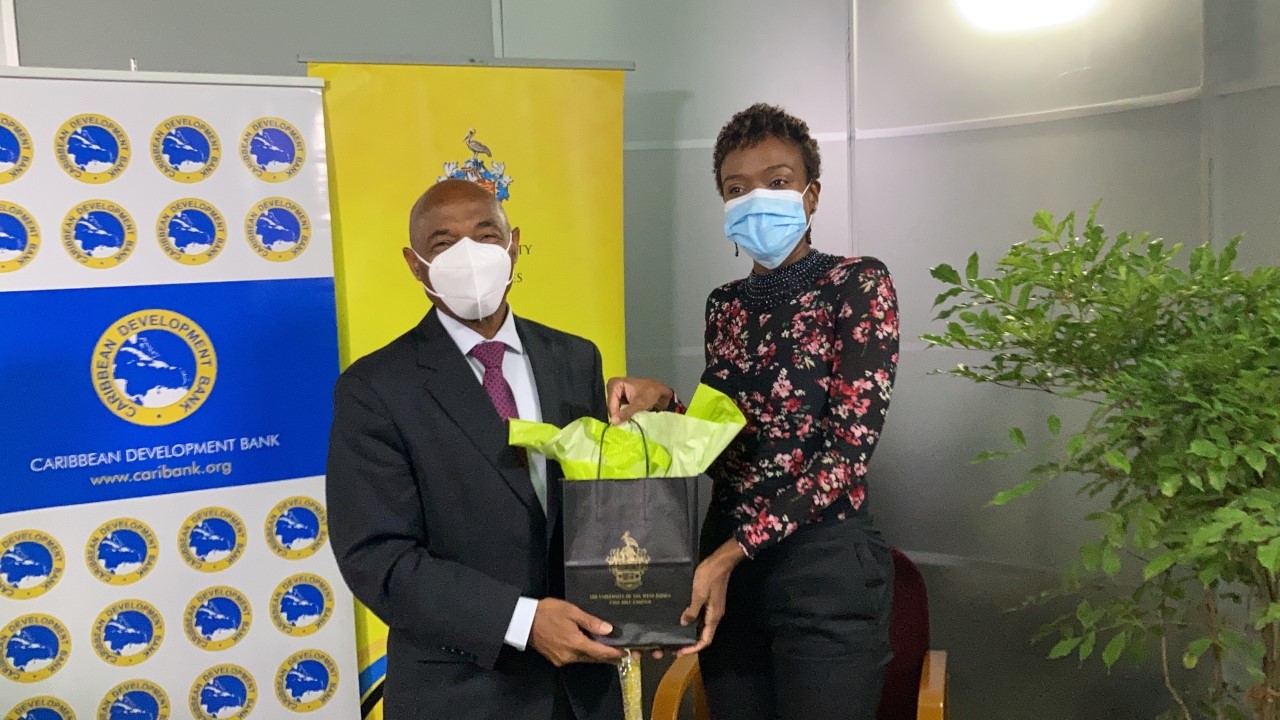 BRIDGETOWN, Barbados – September 9, 2021  – Caribbean countries must adopt a resilience model of development if the region is to achieve the Rt. Hon Prof. Owen Seymour Arthur’s vision of sustained development and escape the chasm of cyclical underdevelopment. This was one of several important policy prescriptions offered by President of the Caribbean Development Bank (CDB), Dr. H. Gene Leon, while delivering the inaugural Distinguished Owen Seymour Arthur Memorial Lecture on Wednesday, September 8. The lecture, co-hosted by the Shridath Ramphal Centre for International Trade Law, Policy and Services (The SRC) of The University of the West Indies, Cave Hill (The UWI) and the CDB, was broadcast live on UWITV. Slated to be an annual event, the lecture series honours the legacy of the late economist and statesman, Prof. Arthur, who passed away on July 27, 2020 at the age of 70.

In the forty-minute lecture entitled “Re-designing Economic Growth Strategies”, Dr. Leon paid tribute to Prof. Arthur’s sterling legacy as an economic visionary, and proffered strategies for economic growth and development. Calling on CARICOM governments to accelerate the completion of the CARICOM Single Market and Economy (CSME) agenda, the CDB President identified trade facilitation and knowledge governance as pivotal for crafting a “new paradigm for our Region”. “Trade integration in the region,” he argued, “remains a hybrid and incomplete state fluctuating between notions of a customs union and common market”. He further attributed the high costs of trade in the region to the lack of harmonized rules, systemic deficiencies in the operation of border services, lack of interconnected regulatory authorities and aging port infrastructure.

In her welcome remarks, SRC Director, Dr. Jan Yves Remy, reflected fondly on the sterling contribution of the late trade economist who she described as a “frequent visitor, devoted mentor, exacting taskmaster, unrelenting debater, and dear friend to the SRC”. She noted that “Owen Arthur’s embrace of trade liberalization and the CARICOM Single Market and Economy as pathways for Caribbean development, would always distinguish him for singular focus at the SRC”, an institution devoted to international trade training, research and outreach.

Pro-Vice Chancellor and Principal of The UWI Cave Hill Campus, Prof. Clive Landis, lauded Prof. Arthur’s dedication to the Cave Hill Campus, noting it was here that the late economist had received his undergraduate training in economics, before proceeding to The UWI’s Mona Campus to pursue advanced studies in the subject. Prof. Landis noted that as Prime Minister, Prof. Arthur had gifted The UWI land at the Lazaretto and that even after his retirement, the former Prime Minister was always willing to share his vast knowledge with UWI students and faculty alike.

Delivering remarks at the evening’s event were also Minister in the Ministry of Foreign Affairs and Foreign Trade, Senator Dr. the Hon. Jerome Walcott, Pro-Vice Chancellor of The UWI Prof. Sir Hilary Beckles, and Mrs. Julie Arthur, widow of the late Prof. Arthur. The Master of Ceremonies for the evening was Prof. Winston Moore, Deputy Principal of The UWI Cave Hill.

Last evening’s event is the latest in a series of initiatives of The UWI to honour the late Prof. Arthur, who was Barbados’ longest serving Prime Minister, holding that office from 1994 to 2008. Upon his retirement from political life, The UWI appointed the former economist by training a Professor of Practice: Economics of Development in 2018. In July 2021, the building formerly known as the CARICOM Research Building was renamed in his honour.