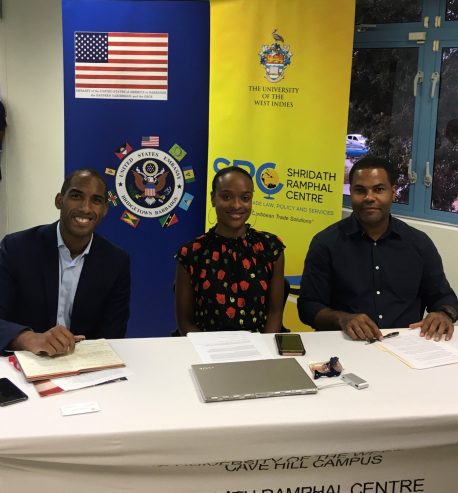 BRIDGETOWN, Barbados – March 13, 2020 –  On Friday 13 March, from 1 p.m. to 2:30 p.m., the Shridath Ramphal Centre for International Trade Law, Policy & Services (SRC) of The University of the West Indies (UWI), hosted one of its signature “SRC Lunch Time Chats”, this time in conjunction with the United States (US) Embassy, Bridgetown.  The Chat focused on the impact on CARICOM of the Phase One US-China Trade Deal (the Deal) signed on January 15, 2020 between the world’s two top economies.

After introductory remarks from the Chat’s moderator, Dr Jan Yves Remy (SRC Deputy Director), Mr. Leland Lazarus (Deputy Public Affairs Officer, US Embassy) introduced the featured speaker, Mr. Robert Daly (Director of the Wilson Centre’s Kissinger Institute on China and the United States).  The audience, most of whom joined the Chat through live streaming, were treated to a detailed presentation by Daly on US – China relations preceding, and subsequent to, the signing of the Deal. That Deal, which comes amidst escalating tensions between the US and China, is unique in a number of respects and notably commits China to USD 200 billion worth of imports in an effort to decrease the gaping US trade deficit.  Mr. Daly noted that while there was hope that the signed agreement would restore certainty to markets and de-escalate tensions, in his view, it represented no more than a “pause”.  That said, he credited US President Donald Trump with bringing greater awareness to critical issues in the US-China economic relations, highlighting that, unlike his predecessors, President Trump had demonstrated success in applying unprecedented pressure to China.  China could also boast a ‘win’ since the Deal could be seen as a commitment by the Trump Administration to begin a dialogue and a “phased approach” towards ongoing negotiations with China.  Daly also stated that other issues may hinder further progress to a Phase Two Deal, such as China’s subsidies of its state-owned enterprises, human rights abuses in areas such as Xinjiang, and attempts by China to spread its 5G technology globally.

Following Daly’s presentation, the discussant, Dr. Antonio Alleyne (UWI Lecturer in Economics Department) contextualized the deal’s implications for the Caribbean. Dr. Alleyne noted that the Caribbean would suffer minimal losses from the Deal due to the Caribbean’s trade divergence in favour of the US over China, as indicated by initial data. That said, he expressed hope that in the future, the Caribbean would increase its exports to China.  Dr. Alleyne also questioned the Deal’s compatibility with the rules of the World Trade Organization (WTO), highlighting that continued weakening of the multilateral system would have negative implications for small developing countries within CARICOM.

During the question and answer session, topics ranged from the impact of the Deal on the Belt and Road Initiatives being pursued by China in some Caribbean countries, to how Caribbean small states should position themselves geo-politically between two hegemons that pursue vastly different ideological approaches in their global relations.  In their remarks, Mr. Daly and Dr. Alleyne both took note of COVID-19’s likely disruptive effects on trade among the US, China and the Caribbean, and in their respective relations in the global economy at large.

WATCH the video recording of this and other SRC Lunch Time Chats by accessing our video gallery here.