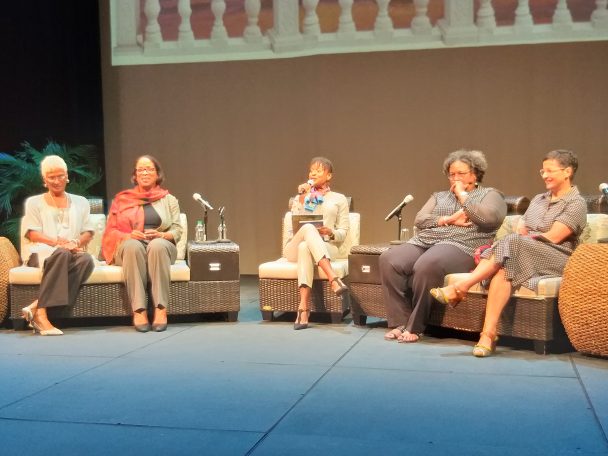 The esteemed panelists were the Hon. Mia Amor Mottley, M.P., Q.C., Prime Minister of Barbados; Arancha Gonzalez, Executive Director of the ITC and Assistant Secretary General of the United Nations; the Hon. Sandra Husbands, M.P., Minister in the Ministry of Foreign Trade; and Ambassador Gail Mathurin, Director General of the Office of Trade Negotiations of the Caribbean Community (CARICOM) Secretariat. The moderator was SRC Deputy Director, Dr. Jan Yves Remy.

The chat was inspired by the ITC’s recent publication entitled “Women Shaping Global Economic Governance”. The book, which was edited by Arancha Gonzalez and Marion Jansen, offers critical reflections by influential women on matters of contemporary global economic governance and trade. Prime Minister Mottley, the only Caribbean woman featured, authored a chapter entitled “Vulnerability and Opportunity: What Small States can teach the world”.

In his welcome remarks at the Evening Chat, SRC Director Neil Paul, stated that the SRC was pleased to be a co-facilitator of this important conversation.  He highlighted that the Event supported the Centre’s mandate to be the leading trade policy training, research and outreach centre in the Caribbean. He used the occasion to announce a free pilot course The UWI is jointly formulating with the ITC to assist small businesses and entrepreneurs interested in exporting internationally.

Delivering opening remarks on behalf of The UWI Cave Hill, Principal Professor Eudine Barriteau, GCM, stated it was vital for influential women from diverse backgrounds to share their unique perspectives on global governance and trade and that the event complemented The UWI’s work on gender issues. Professor Barriteau, a noted gender scholar, highlighted the contribution women make to economic governance and noted that leaders have no choice but to ensure that women are not marginalized.

Dr. Remy then moderated the star-studded all female panel in an open, free-flowing discussion on a range of global economic issues touched on in the ITC publication.  For instance, Prime Minister Mottley highlighted the importance of leaders listening to their people, and took the opportunity to express her warm gratitude to the ITC’s Arancha Gonzalez for being a valued friend to the Caribbean and to Barbados. Prime Minister Mottley also informed the audience that the SRC will be providing technical support to former Prime Minister, the Rt. Hon. Professor Owen Arthur, who will be assisting the Barbados Government in its preparation for co-hosting the 15th United Nations Conference on Trade and Development (UNCTAD) Quadrennial Conference (UNCTAD XV) in October 2020.

Mrs. Gonzalez reiterated the need for small States to be present at the table when global rules are being set, and the necessity of a multilateral approach to solving problems, such as climate change. Ambassador Mathurin noted the importance of the World Trade Organization’s electronic commerce agenda to the Caribbean and the need for Caribbean countries to take these negotiations seriously. Minister Husbands, with her background in helping small businesses, endorsed the view that e-commerce holds great potential to transform opportunities for Caribbean entrepreneurs.

The ITC’s Chief of Staff and Chief Adviser to the Executive Director, Matthew Wilson, delivered the vote of thanks, bringing to a close a wonderful evening of lively discussion with a large audience comprising the Diplomatic corps, members of The UWI community, students and the general public.

Previous Post Where Trade and Health Intersect: Front-of-Package Labelling in the Caribbean as a Case Study
Next Post Rough Seas or Smooth Sailing for UK-CARIFORUM Relations in No-Deal Brexit?