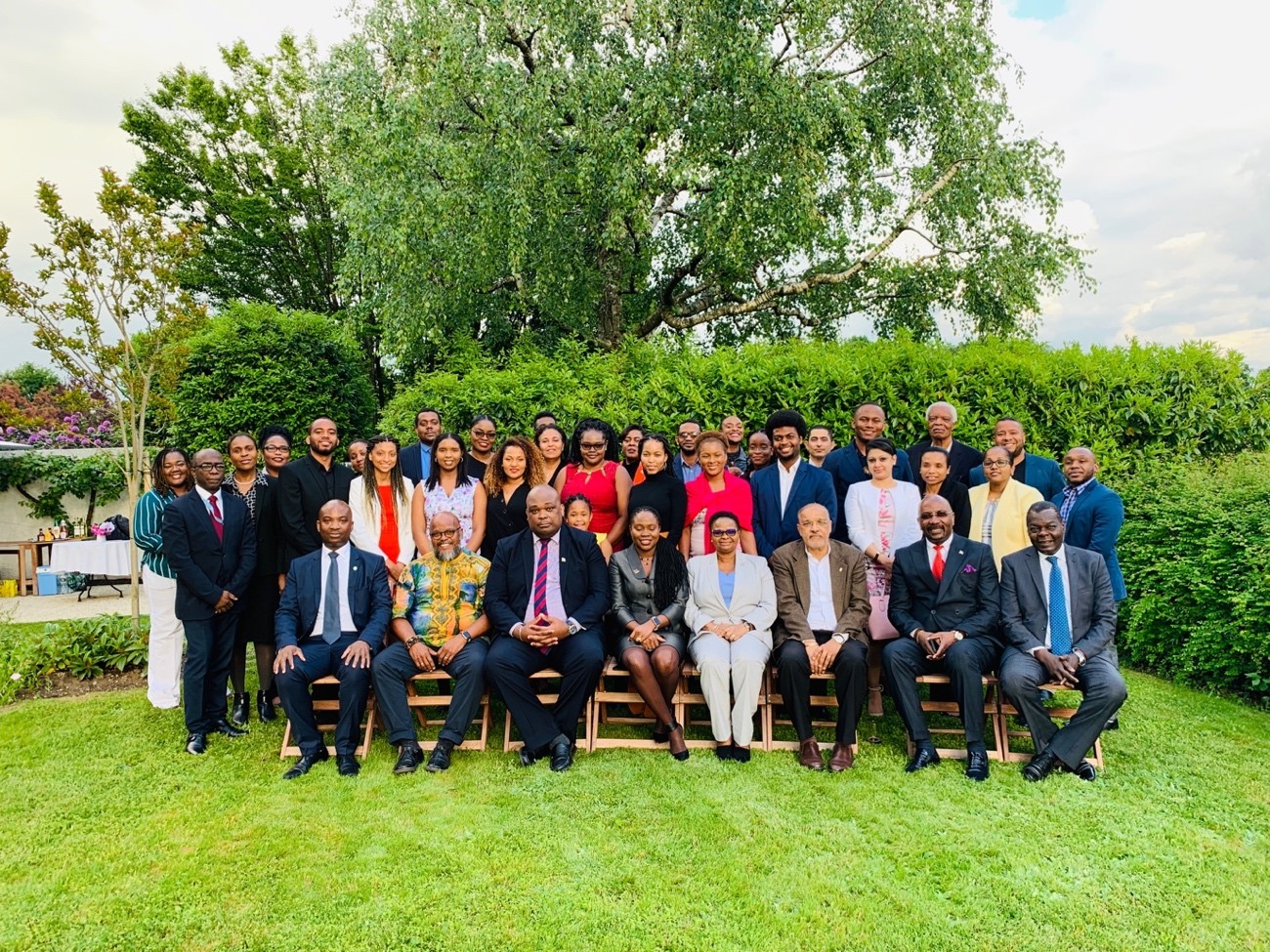 As the plane climbs above Lake Geneva and I say goodbye again to the Swiss Alps, I reflect on my three-week stay in Geneva accompanying UWI/Cave Hill students enrolled in the SRC’s Masters in Trade Policy (MITP) programme.  Geneva, a city in the heart of Europe, represents the best of humanity.  It is a place where the world’s statesmen and women meet to pursue common values and promote peaceful relations among themselves, and is home to a number of multilateral organizations, like the United Nations, the World Trade Organization (WTO), the World Health Organization, to name a few.

For many in the trade world, Geneva has lost its shine.  Trade wars sparked by increasing trends towards protectionism and unilateralism, and the growing crisis in the WTO, are telltale signs that multilateralism is fraying, leading some to question the remaining relevance of this small city in Switzerland known for its watches and cheese.

For the 9 MITP students, and 2 students from Cave Hill’s Masters in Integration Studies embarking on their Study Tour, any such debates were far from mind.  For them, the yearly trip to Geneva in late May- early June, to witness first hand trade diplomacy is the highlight of a grueling nine-months in the study of trade law, economics and global governance concepts.

As recently appointed SRC Deputy Director and as Lecturer on the MITP, joining this year’s Tour with SRC Director Neil Paul and MITP Administrator Desiree Evelyn, reinforced why Geneva remains a useful place to bring the next generation of Caribbean trade professionals.

Facilitated by the Trinidad and Tobago Mission and the Virtual institute of the United Nations Conference for Trade and Development (UNCTAD), the Study Tour lasted two weeks.  The first week was spent at the UNCTAD, an organization created to enable developing countries’ integration into the world economy on matters of trade.  Students benefitted from presentations on the origins of UNCTAD, as well as on more topical issues such as the Sustainable Development Goals, Trade Facilitation, and Investment.  The real highlight, however, was a motivational talk by Ms Pamela Coke-Hamilton – the first Executive Director of the SRC – and recently appointed Director at UNCTAD in Trade and Commodities, on why the Caribbean must lend its voice to multilateral discussions.

The following week was spent at other organizations – the Advisory Centre on WTO Law, International Trade Centre (ITC), the WTO, World Intellectual Property Organization, the South Centre – and was punctuated by interventions by Caribbean professionals, like Matthew Wilson (ITC) and Wayne Mc Cook (WTO), who occupy key and influential positions at the Cabinet level of their respective organizations.

It was their perspectives, and those of CARICOM diplomats that created the strongest impressions on the students.  The perspectives of Ambassadors and Mission staff from the OECS, Jamaica, Haiti, Barbados, Trinidad and Tobago, Guyana, the Bahamas, mattered because students were told what representation really looks like, and means, for Caribbean countries.  The graciousness of the CARICOM diplomats was accentuated by a dinner reception at the residence of Ambassador Chad Blackman of Barbados where Caribbean banter and cuisine were on full display.  The event, for many, was the highlight of the Study Tour.

During the visit, I was invited to present views on the current Appellate Body “crisis” at an event hosted by outgoing Appellate Body Member, Peter Van Den Bossche.  The Appellate Body has been the appeal court of the WTO for over 25 years but it faces annihilation by the United States’ repeated blocking of the appointment of new judges to that court.  The US’ intransigence, which it says is warranted by the Appellate Body exceeding its mandate, has generated a host of reform proposals by other WTO Members, like the EU, Canada, and Brazil who seek a solution through negotiations aimed at improving the functioning of the Appellate Body.

In preparing remarks, I felt the weight of expectation from the students to present a uniquely Caribbean view.  I have long believed that the WTO dispute settlement system needs fixing. While it represents an improvement over the former system, the GATT, the Antigua and Barbuda case against the US exposes its flaws, including that powerful countries can escape compliance with decisions rendered against them.

So, my presentation focused on how the Caribbean states must situate themselves in the debate on reform pointing out that we cannot afford to give up a system that is policed by a strong Appellate Body and strong rules.  The proposals on the table that promote the rule of law – through a better functioning, more efficient and impartial appeals court – commend themselves to CARICOM states; those that do should not be supported by us.  That said, CARICOM must not lose this opportunity to introduce reforms that permit the smallest states to participate and have a fair day in court.  Much more to say – but that, my friends, is for another article.

Geneva also reminded me that we must invest more in the young people.  Part of the MITP requirements entails completion of a three-month internship in a trade organization or entity to prepare students for the work force.  The SRC is working hard to encourage the Caribbean Missions and organizations in Geneva to host our students for at least a month after the Study Tour.

I also witnessed firsthand the value of being part of international networks and activities that promote the training of students.  First, with Law Lecturer, Dr. Ronnie Yearwood, and the support of Dean Dr. David Berry of the Cave Hill Law Faculty, we have piloted a new legal clinic – TradeLab – which places UWI/Cave Hill among an international network of Universities and trade centres – like Georgetown Law, Universities of Ottawa and Queens, Hebrew University, Trapca (Kenya), Monash University – offering free legal advice to developing country beneficiaries on issues of trade and investment law.  Through our supervision of third year Cave Hill law students enrolled in the clinic, Dr Yearwood and myself assisted three Caribbean clients with trade problems by providing legal research and analysis.  As a pilot clinic, I met with other TradeLab members to consider best practices and share experiences on how to promote practical learning to trade law students.

I was also proud to judge the semi-finals of the Final Round of the John Jackson Moot Court Competition on WTO Law.  For the first time this year, the UWI Cave Hill Faculty fielded an inspiring team of two law students – Tyra Trotman and Jacob Phillips – who, under the tutelage of Law Lecturer/Deputy Dean Westmin James, participated in the regional round of the competition in Washington D.C.  Winning teams from these regional rounds get to compete in the Final Round in Geneva, in June, among the best teams in the world.  While our team did not make it to the Final Round since they were defeated in the regionals by Harvard, we must continue to participate. I am heartened by the fact that while there were no African teams in the competition four years ago, this year’s overall team winners hailed from Kenya’s Strathmore University who faced off in the final round against Harvard. Investment by donors in that region has resulted in Africa now having a strong set of lawyers who will bring value to international diplomacy and trade negotiations.

The plane hits the Barbadian airport tarmac and I am reminded that it is a privilege to participate in a Study Tour in Geneva, which remains possible because of the continuing support of many, including parents, the administration of the Cave Hill Campus, Geneva-based organizations and CARICOM Missions.  We will be touring again next year because, at the SRC, we believe in the importance of bringing our students to the world and the world to our students.