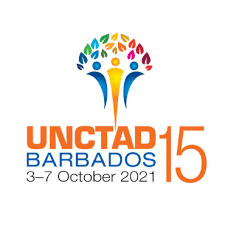 In October 3-7, 2021, Barbados not only successfully hosted the Fifteenth Quadrennial Conference of the United Nations Conference on Trade and Development (UNCTAD XV) in hybrid format, but has assumed the presidency of this UN General Assembly organ for the next three years. Barbados is not only the smallest State and first small island developing State (SIDS) and Caribbean nation to do so. It also accomplished this feat during a global pandemic which has claimed over 4.9 million lives globally to date and inflicted significant economic and social turmoil.

This SRC Trading Thoughts discusses the main UNCTAD XV outcomes and provides a perspective on what might come next as the global community seizes the ‘COVID moment’ to reset the global trade and development agenda.

Since Barbados’ successful bid in 2019 to host the conference, much note has been made of the symbolic and tangible importance of this accomplishment at such a critical juncture in global trade and development history. From its establishment on December 30, 1964, UNCTAD’s work has centered on three interlinked pillars: research and analysis, consensus building and technical cooperation. Fast forward nearly sixty years later, the need for UNCTAD is even more acute in the face of a multilateral trading system confronting unprecedented challenges, including entrenched inequalities and an accelerating climate crisis in which SIDS are on the frontlines.

The UNCTAD XV Conference, being the first on trade to be held since the COVID-19 outbreak, has been internationally welcomed as an opportunity to ‘reset’ the global trade and development agenda, by addressing longstanding inequalities and charting a resilient development path with the 17 UN Sustainable Development Goals (SDGs) – under Agenda 2030 – as signposts. As an intergovernmental body whose membership numbers 195 members, UNCTAD’s work must be responsive to the diverging needs of its members. While decision-making at UNCTAD is done on a consensus-basis of negotiations, one important outcome of Barbados’ hosting is that it has afforded the Caribbean and SIDS unprecedented ability to influence UNCTAD’s work priorities for its fifteenth session. This Caribbean imprint is particularly visible in the Bridgetown Covenant, the main negotiated outcome document, the Spirit of Speightstown political declaration, the Declaration of the inaugural UNCTAD Gender and Development Forum which was jointly hosted by UNCTAD and feminist institutions and civil society from the global South; and  the first UNCTAD SIDS Ministerial Declaration.

Building on the UNCTAD XIV Nairobi Maafikiano of 2016, the Bridgetown Covenant outlines a comprehensive policy analysis which sets the context for Members’ mandate to UNCTAD on what its work programme should comprise for the duration of its fifteenth session. The text highlights potential areas for reducing inequity and vulnerability for developing countries, including digitization, women and youth empowerment, human rights, and the environment. It further spoke to the need for economic transformation through diversification, sustainable and resilient economies, development finance and multilateralism.

In the spirit of revitalizing the intergovernmental machinery, including the Trade and Development Board (TDB) which is the highest body between the conferences, the framers of the Bridgetown Covenant have outlined several tasks they wish to accomplish. First, they have agreed for the outcomes taken by the TDB to be kept and made available to the membership and public. This allows for greater transparency and follow-up on decisions taken. Second, it also mandates enhancing UNCTAD’s contribution to the UN General Assembly’s work and to contribute to the implementation and follow-up to outcomes of relevant global conferences. This is important as UNCTAD generates insightful research and analysis which useful for governments in discussions on trade and development issues. Third, the stocktaking of work and accomplishments of UNCTAD over the past six decades is also a vital contribution that has been mandated.

Barbados’ negotiating team, and CARICOM, must be commended for succeeding in having many of the major issues affecting SIDS included among UNCTAD’s ambitious work priorities. With three years to go, however, the list of priorities is indeed ambitious, and the Caribbean must be strategic in which areas it seeks to prioritise during Barbados’ presidency. On this note, the region would have greatly benefited from the insights of the late Barbados Prime Minister Prof. The Right Excellent Owen Arthur, who, had he lived, would have served as the head of a specially constituted Commission to guide some of the theoretical work needed by SIDS that could be pursued under the Barbadian presidency.

Among the objectives outlined in the mandate for the work programme, there are a few areas we would recommend as priorities. These include more concentrated research and technical analysis of the multilateral trading system (MTS) and its impact on SIDS. Particularly useful would be assessments of the impact of WTO subsidies rules on small States’ ability to industrialise, especially given their inability to distort global trade due to accounting for only a tiny share of global trade flows. Further analysis is needed on making special and differential treatment (S&DT) – special flexibilities for developing countries under the WTO’s Agreements – more effective in the new international dispensation.

Another suggested area that deserves greater attention in the UN system is a multidimensional vulnerability index. Work began in the Commonwealth Secretariat some thirty years ago, but there is need to assess its applicability to the trade context, including as a method for determining eligibility for S&DT which has become a sticking point in the WTO. The SRC has already started work on this area in a working paper we published in 2020 which conceptually proposed the use of a trade vulnerability index for determining access to S&DT in the WTO.   Internationally, it is increasingly apparent, and amplified by the pandemic, that the use of income per capita is not an adequate measure of a country’s prosperity or as a basis for determining its eligibility for official development assistance (ODA) and other concessional financing. UNCTAD can be yet another source of needed empirical research on alternative measures for access to development assistance, including vulnerability.

While there is already an active work programme of women and trade at UNCTAD, the declaration emanating from the inaugural UNCTAD Gender and Trade Forum highlighted the power and gender imbalances in the global economy and demanded a more inclusive approach to women’s issues that embraces the views and perspectives of the global South feminist organizations. This proposed feminist reshaping of the trade and development discourse recommends a mainstreaming gender and social justice analyses in trade, finance and investment policies and consistent with the SDGs.

Although the SIDS declaration includes strong condemnatory language on arbitrary blacklisting, we suggest UNCTAD add to its work programme research on the impact of arbitrary blacklisting on small States’ ability to attract financing for development and to engage in the global trading and financial system, more broadly. Indeed, in light of the Financial Action Taskforce’s workstream on unintended consequences of the misapplication of the FATF standards, this is one area where UNCTAD research and analysis input could be useful.

As UNCTAD approaches sixty years of existence in 2024, its work is needed now more than ever given the multiplicity of development challenges confronting the world and with differentiated impacts on developing countries. With the mandate for what its work priorities on the trade and development agenda outlined in the Bridgetown Covenant and the Spirit of Bridgetown Declaration, UNCTAD Member States will now work via consensus on finalizing their work programme.  In a press conference following the UNCTAD XV closing ceremony, Barbados’ Prime Minister Mottley in her capacity as UNCTAD President, outlined what she wished to see as the critical areas, including trade logistics, creative industries, a global clearing house for vaccines and nutrition security.

While Barbados will be in a strategic position to spearhead the trade and development agenda for the next three years, the nature of UNCTAD as an intergovernmental body means it cannot do this alone. It requires the support and coordination of all UNCTAD member countries in order to effect this ambitious work programme. It further necessitates greater collaboration not only with other agencies in the UN system, but also the Bretton Woods institutions (International Monetary Fund and the World Bank). Additionally, civil society and the youth must pressure governments to honour the commitments they have made. Barbados should lead by example and use its unique position to foster greater and more meaningful South-South relations with untraditional partners. The collaboration already shown between Africa and CARICOM, through the hosting of a Summit by the Barbados and Kenyan governments are positive signs.

In the ‘Spirit of Speightstown’, UNCTAD members outlined the priorities to be “addressed with the utmost urgency”. These are: revitalized multilateralism, inequality within and between countries, Vulnerabilities of developing countries, including small island developing States, financing sustainable development, decision-making and participation in international institutions, tax cooperation, and the digital divide. The naming of the document for Speightstown – Barbados’ second largest town – is fitting not just because Prof. Arthur had been the Member of Parliament for the constituency in which the town is located, but because this urban centre fully encapsulates all of the central challenges confronting the developing world to this day.

Speightstown continues to experience the brunt of the climate change challenges with no less than two yearly intense weather events which exacerbate the vulnerable households living in the town’s low-lying environs and literally sever the town from any potential trade communication network when roads are inundated with rising waters so close to the shoreline. Furthermore, there is the existence of an unconscious bias and the structural discrimination against the women who line the town’s streets spending hours on the sidewalk hawking their fruits and vegetables across the length and breadth of the town.

As UNCTAD members formulate and implement their final work programme, they should recall and confront the global common good to ensure that every citizen of an UNCTAD member state enjoys and has equitable access to health, education, housing, safe and nutritious food, clean water and decent work as envisioned under the SDGs. It is only then that we will know for sure in three years-time that UNCTAD XV effectively seized the ‘COVID’ moment for sustainable development and was not merely symbolic but was truly a success.

Previous Post The Science of the COVID-19 Vaccine Webinar
Next Post From the Savannah to the Sea: Connecting Kenya and Barbados through Trade and Investment